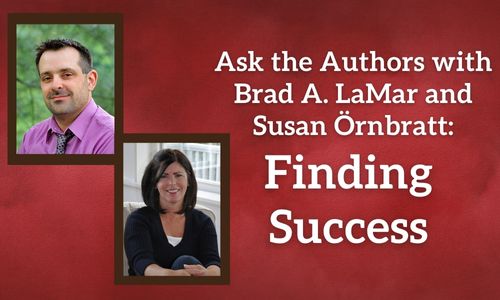 What defines success for an author? Is is the number of books sold? The number of awards they recieve? Authors Brad A. LaMar and Susan Örnbratt join us for this week's Ask the Authors blog post on defining and finding success as an author. If you have any questions you'd like to ask our authors, make sure to leave a comment on our Facebook or Twitter!

Thanks for joining us this week! Could you both give us a brief introduction to who you are and what your books are about?

Brad: My name is Brad A. LaMar and I have been published since 2013. My first novel published is titled The Obsidian Dagger and it is the first book in the Celtic Mythos series. Years ago I wrote a short story for my two young kids and I became inspired to push that story into a fantasy action adventure. It’s set in today’s world but fuses Celtic folklore, mythology, and legends and gives our Heroes Brendan, Dorian, and Lizzie all sorts of trouble. The adventurers must track down Dorian’s father, the king of the Leprechauns, before it’s too late. There are plenty of thrills and fast-paced action scenes to keep the reader turning the pages.

Susan: My name is Susan Örnbratt and I have been published since 2015.  My novel, The Particular Appeal of Gillian Pugsley, was inspired by a set of poems that my grandmother had spent her life writing then gave to me just weeks before her death.  It is the fictitious story of a granddaughter who is also given a set of poems.  Based on those poems and the death of her grandmother, she begins to write her grandmother’s story—the story of an eighteen-year old Irish Gillian who is sent to Canada in 1932 where she falls in love for the first time.  Something unexpected happens that drives her away from Christian.  Fourteen years, a Great Depression and a World War later, Christian sets out to discover why Gillian was ripped from his life.  What he discovers on the Isle of Man will change them both forever.  This is not only a love story between a man and a woman but at the heart of it, is the love between a grandmother and granddaughter.

What do you feel has been your biggest accomplishment as an author so far?

Brad: My biggest accomplishment to this point--aside from being published--is the fact that The Obsidian Dagger has been a number one best seller on Amazon. It was pretty thrilling to see my book and my name in a top spot on the site.

Susan: Aside from being published, The Particular Appeal of Gillian Pugsley received a number of accolades including The IBPA Benjamin Book Awards – finalist and silver winner in Fiction Romance as well as Foreword Reviews’ 2015 Indiefab Book of the Year Award finalist.  This was something I hadn’t expected in any way, and I appreciate being recognized formally.  Apart from that, I have to say that having brought a number of readers to tears is my all time biggest accomplishment.  It means they really felt the love and heartbreak in my story.

What are your future aspirations and goals as an author?

Brad: I have many aspirations as an author. I am optimistic that Celtic Mythos will one day be a movie series or online streaming series or something. I have written other novels, poems, short stories, and children’s books as well and hope to get many of them published along with whatever stories I create in the future.

Susan: I am currently doing revisions on my latest novel.  I hope one day to acquire an agent.  I am also toying with the idea of rewriting two previous novels that I have written but have not yet been published.

How did you define “success” as an author before your book was published? Has that changed since then?

Brad: Success, to me, is the accomplishment of one’s goals. I had been rejected by so many agents with other books prior to signing on with Light Messages, so to that point I was successful in having written a novel or three even if it was just for me. I learned so much from those rejections. I believe you can be successful on the journey to your goals. They may change along the way.

Susan: Success has always been measured by my goals.  Did I achieve what I set out to?  If I can answer yes, then I have succeeded.  Becoming a published author has mirrored other accomplishments in my life in that my goals and aspirations change as I go along.  The path will slowly fork out with a new goal at the end of each.  I have always defined success in this way and that has not changed.  Perhaps the reason for this is that I think of myself as forever evolving.

What has been your biggest inspiration as an author?

Brad: My inspiration as an author is imagination. I let mine run wild with stories even taking ideas from dreams I have and try to deliver a fun story with developed characters. I especially like to create strong female characters because I think every girl deserves to see how powerful she can be. I want my daughter to see that and I want other daughters to see that too.

Susan: History has always been a profound inspiration for me.  Not necessarily events that took place in history but rather the real life stories of the average person during times of strife or adventure or prosperity.  What were their quiet moments like?  How did the average person deal with what may have been happening in volatile times?  I’m also very much inspired by how the present connects to the past, how our actions can be traced by a path to something that may have happened long ago, generations ago.

What has been the biggest challenge you’ve had in the pursuit of your goals?

Brad: I think life is the biggest challenge. When you are pursuing your goals such as to write a novel, things like work and schedules and commitments can impede you. These obstacles can also inspire you and make your understanding what being human is all about and that emotion is what you try to translate to the page. I want my readers to feel it like I do.

Susan: Definitely location!  I have been fortunate to live in a variety of countries but it comes at a cost, particularly when you live in a non-English country and you are an English writer.  It is often the case that your resources as a writer are limited when living in a country where English is not the language of everyday social or working life.  It’s possible to start small writers groups through expat communication or online sites but you might not find a list of weekly readings and signings in English that you can attend within a given community/city.  In my case, there are opportunities to visit Swedish authors’ signings and readings, book events, etc, and I do gain insight from any involvement in the Swedish book industry.  BUT, it is not and will never be as fruitful for me as an English writer.  This is an on-going challenge for me, as though I am on the outside looking in and no matter how hard I try to crack the window, I never quite break free.

What do you hope that readers remember after they finish one of your books?

Brad: When someone reads my books I hope that they put it down and think about what a fun journey they just witnessed. I want people to connect to my characters and their hopes and challenges. Sure, they won’t slay dragons or fight giants, but life has its own personal dragons and giants that it throws at us. There are no challenges that we can’t get past or at the very least give it our all to do so.

Susan: When people read my stories, I hope the emotions stay with them long afterwards.  I hope they remember less about what the characters did and more how the characters choices and struggles made them feel.  That said, I hope they connect to the stories’ details so that they sees how the present is threaded into the past.  I also hope they are able to draw on their own life’s experiences, feel something from their own past, joy, hope, whatever it may be.

What is your favorite part about being an author?

Brad: There are several things that I love about being a published author. One thing is that for better or worse I’m able to leave behind creations from my imagination. That’s just a cool thing to think about. Having a pathway to getting my stories out of my head and into print is also an awesome privilege. Admittedly, I was a little stoked when at my last signing I had several fans who wanted to meet me and share a little bit about what they loved about the series. That made me feel good and encouraged. A writer needs that encouragement because writing a novel can be daunting at times, but what’s life without a little strife… not a page turner.

Susan: There’s something extremely special about having someone read a story you have created then come to you and say what it meant to them.  I love this need I have to tell stories.  I always told stories to my kids when they were little, silly, fun stories mostly.  Since I have always felt in ways that I was meant to be born in another time period, (a period where women wore hats), I feel grateful that I’m able to escape into the past through my writing.

Learn more about Brad A. LaMar