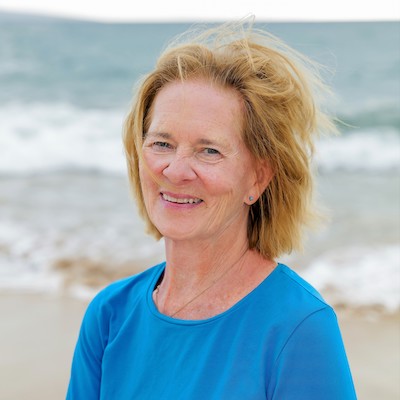 Nancy Nau Sullivan is the author of memoir, mystery, and a novel. She began writing in high school and college for the newspapers. Later, she worked as an editorial assistant  at New York magazines and as a print journalist throughout the Midwest.

Nancy was born in San Francisco, grew up outside Chicago, but often visited Anna Maria Island, Florida. She returned to the island with her family and wrote an award-winning memoir, The Last Cadillac, about the years she cared for her father while her children were still at home––a harrowing adventure of travel, health issues, adolescent angst, with a hurricane thrown in for good measure. She went back to the Florida setting for her first cozy mystery, Saving Tuna Street, creating the fictional Santa Maria Island for the Blanche Murninghan mystery series, now in its fourth installment with A Deathly Irish Secret. She also wrote a novel, The Boys of Alpha Block, based on the years she taught in a boys’ prison in Florida.

Nancy, for the most part, lives in Northwest Indiana. She is a graduate of the University of San Francisco (San Francisco College for Women, Lone Mountain) with a double major in Spanish and political science and holds a master’s degree in journalism from Marquette University. She also attended the University of Florida in English and education. Find her at nancynausullivan.com and Twitter @NauSullivan. 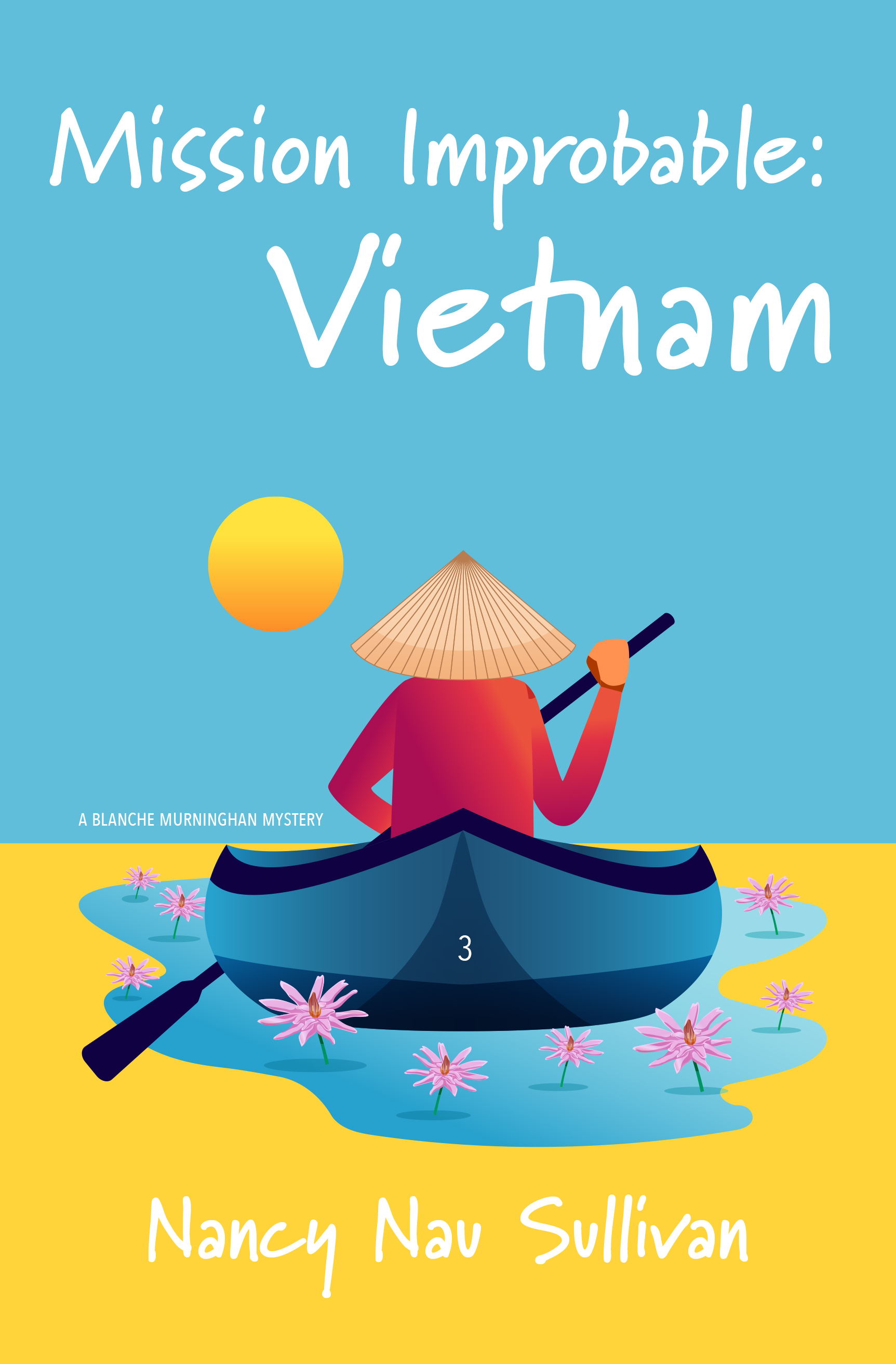 Bang has a knack for adopting the most improbable causes...

Blanche “Bang” Murninghan was perfectly content sitting on the dock of the Peel ‘n Eat Pier on Santa Maria Island, sipping an excellent draft and wiggling her fishing pole after an elusive sheepshead. Perfectly content, that is until Jean McMahon appears at her side and forever disrupts Blanche’s peaceful idyll with ghosts of the past.

Blanche's amateur sleuthing skills have become local legend, and Jean needs her help. It’s not a simple favor Jean asks: Will Blanche go to Vietnam with her and look for Jean’s mother?

Blanche feels an old wound ripped open in her heart. Her father was killed in Vietnam, and she’s never gotten much history from her beloved grandmother and mother on the subject. She realizes she and Jean share a powerful bond: they both want the truth.

Blanche and Jean don’t stop once they land in Saigon, now Ho Chi Minh City. Ex-pat “Stick” Dahlkamp makes sure of that. They pick up the search together. The three cross the rice paddies on Stick’s Honda Dream to Ben Tre and My Tho, old stomping grounds for Stick, a former Ninth Infantry Division Riverine and now the owner of the popular bar The Follies. He’s got friends in jungle towns who might help, and indeed they do. And don’t. Blanche begins to wonder if he’s running them off the road.

As they trace Jean’s mother’s steps, they meet more than one shady character who thinks it better to let things lie. Against her better judgment, Blanche beats down the doors of the past. She is looking for Jean’s mother and following her father’s trail. He left without a trace. Or did he? Does anyone?

Mission Improbable: Vietnam is the third book in the Blanche Murninghan cozy mystery series. Each of the books can be read as a stand-alone. Foreword Reviews is in love with the "spunky heroine" and Kirkus Reviews says, "There’s a reason Blanche Murninghan’s cousin Jack calls her 'Bang.' When she gets mad, it’s an event to rival a Santa Maria Island sunset—and it happens about as often."

Fans of Jana Deleon's Miss Fortune Mystery series and Tonya Kappes A Camper and Criminals Cozy series will fall hard for the colorful characters and exciting misadventures in the Blanche Murningnan Mysteries. 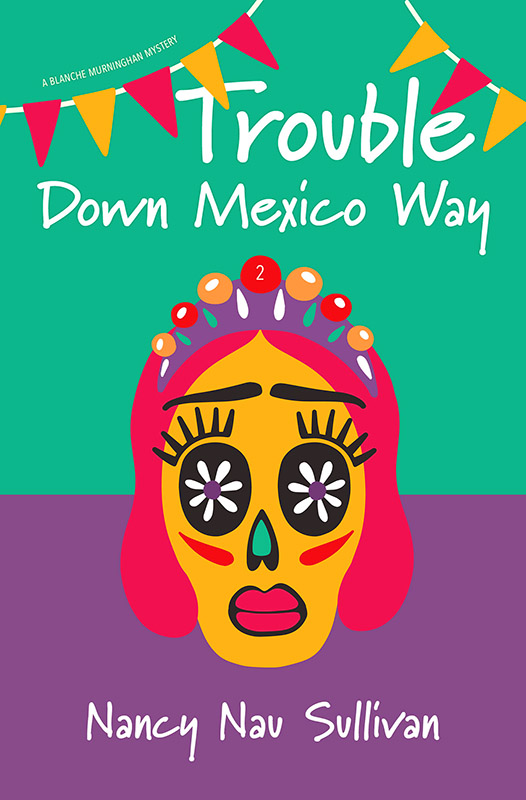 Trouble has a way of finding Blanche Murninghan...

When Blanche “Bang” Murninghan visits an exhibit of ancient Mayan ruins in Mexico City, she sees that all is not ancient. One of the mummies has a pink hair clip embedded in its hay-like do, and the texture of the skin is not quite right.

Blanche, a part-time journalist, starts to dig for answers and gets tangled in the mystery of the mummy at the Palacio Nacional.

Her cousin and traveling companion, Haasi Hakla, aids and abets—and puts the reins on Blanche. All the while, the two eat and drink their way across the city, following one hunch after another with a cast of colorful characters that include a prescient elderly chilanga, an amiable overworked detective, and a stunning doctor of shady deeds.

The cousins are willing to risk kidnapping and attempted murder to get at the truth—but first, Blanche stops for another excellent beer and Haasi delights in one more taco al pastor.

Trouble Down Mexico Way is the second book in the Blanche Murninghan cozy mystery series. Each of the books can be read as a stand-alone. Foreword Reviews is in love with the "spunky heroine" and Kirkus Reviews says, "There’s a reason Blanche Murninghan’s cousin Jack calls her 'Bang.' When she gets mad, it’s an event to rival a Santa Maria Island sunset—and it happens about as often."

Fans of Jana Deleon's Miss Fortune Mystery series and Tonya Kappes A Camper and Criminals Cozy series will fall hard for the colorful characters and exciting misadventures in the Blanche Murningnan Mysteries.

"The flavors, colors, and history of Mexico are a vibrant backdrop for Trouble Down Mexico Way, a funny, fish-out-of water mystery novel." –Foreword Reviews

"I was ready to book my tickets and hop on a plane." –Edelweiss Reviewer 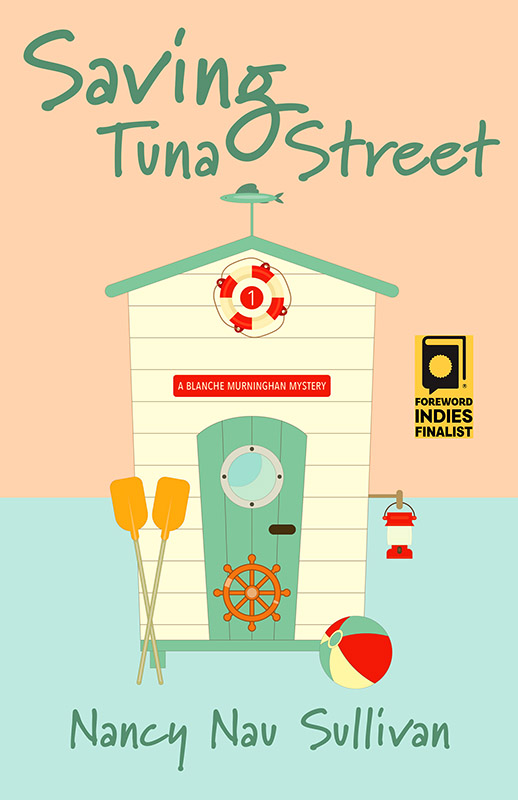 Blanche “Bang” Murninghan is a part-time journalist with writer’s block and a penchant for walking the beach on her beloved Santa Maria Island. When land-grabbing tycoons arrive from Chicago and threaten to buy up Tuna Street, including her beachfront cottage, her seemingly idyllic life begins to unravel. Blanche finds herself in a tailspin, flabbergasted that so many things can go so wrong, so fast.

When her dear friend is found murdered in the parking lot of the marina, Blanche begins digging into his death. With her friends Liza and Hassi by her side, she stumbles into a pit of greed, murder, drug running, and kidnapping. Blanche has survived her fair share of storms on Santa Maria Island, but this one might just be her last.

Saving Tuna Street is the first in the Blanche Murninghan Mystery series. Blanche has feet of sand and will be off to Mexico, Argentina, and Spain for further mayhem in the series. But she always returns to Santa Maria Island.

"It’s Blanche alone who puts the bang in the book, and her debut should make readers sit up and take notice. A welcome newcomer to the South Florida genre." –Kirkus Reviews

"The chosen family dynamics of island life are a highlight of the cozy mystery Saving Tuna Street, and greedy profiteers are its villains." –Foreword Reviews