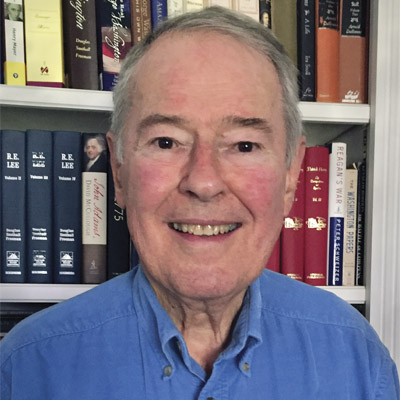 Peter Reese Doyle was born in Pensacola, FL in 1930. His father was a naval aviator and, in Peter's younger years, the family moved often as a result.

After graduating from Washington and Lee University, he married Sally Ann Jackson of Roanoke, VA. He studied at Virginia (Episcopal) Theological Seminary in Virginia and at Seabury-Western Seminary in Illinois, receiving the B.D. degree in 1957. He and his wife served as Episcopal missionaries at Cuttington College and Divinity School in Liberia, West Africa, where he taught theology and Sally Ann taught French.

In 1961 Peter began two years of graduate studies at the University of Basel. At the suggestion of Professor Karl Barth, he chose to study Jonathan Edwards' extensive writings on the work of God's Spirit in human lives. Peter later served as a pastor in Virginia, South Carolina, Tennessee, and Alabama and taught theology at several seminaries.

Since retiring from the pastorate in 2006, he has focused his energies on ministering to college students in Auburn, Alabama. He also continues his ministry of writing inspirational adventure stories for young readers (The Daring Family Adventures series and The Drums of War series). Peter and Sally Ann have two children and five grandchildren.